When I graduated from the U.S. Navy recruit training command (a.k.a. “boot camp”) at Great Lakes, Illinois, in 1998, the Master Chief Petty Officer of the Navy (John Hagan at the time), gave a speech to the graduates. In the speech, he advised us to take advantage of the educational and financial benefits the Navy offered. But the words he used were for us to “not leave the Navy dumb or poor.” It was a catchy phrase that stuck in my mind for the next 20 years, and I think I was better off by keeping his advice in my mind.

A recording project like the one I just went through this week is a major undertaking for a performing musician. It’s on a par with writing a book for a humanities professor or completing a research study for a science professor. It’s expensive and time consuming. Sadly in today’s market, there is no real monetary gain to be made in the short term from such a project.

But I would like to repurpose MCPON Hagan’s advice: don’t leave a recording project dumb or poor.

Let me explain. I was very lucky to have in my recording engineer a fantastic producer. Christian Amonson is a great musician and can get to the heart of a score as well as bring out the best in the musicians. During the 25 hours of recording for this album, I realized some fundamental things that I need to work on (more quality control, response, some elements of articulation technique and a more expressive sense of direction). These happened over and over, and I am glad that I became so aware of these issues. I have a renewed interest in getting better in these areas. I am not leaving the recording session “dumb.”

The last project I did with Christian’s company, my album “Refracted Light,” did not really earn any direct money for me, but it did open a lot of doors. Most important, it provided some solid evidence of my performing and creative abilities to the CSU trumpet search committee to hire me. And this latest project will provide equally-strong support for when I come up for tenure and promotion. And, in general, I am able to connect to lots of other artists and prospective students with good recordings to share with them. I am pretty sure I’m not leaving the recording session “poor.” Use your good recordings for marketing. Maintain relationships with your recording collaborators. The revenue may be “downstream,” but it’s revenue! 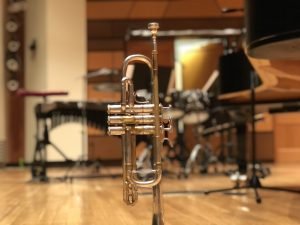 Yesterday’s recording session ended with a problem over how to record a computer-accompanied piece by Kevin Olson. This piece has computer cues to advance through the score–the cues help determine what the accompaniment is doing (that, and the trumpet sound). The problem was that my bluetooth pedal was not connecting with my computer, so I couldn’t advance the cues. This occupied about three hours yesterday afternoon. Needless to say, I was worried about my timeline for the week.

When I came home last night, I tried a different computer, and the bluetooth pedal worked. So, this morning, we were able to knock out this complex, highly technical piece in three hours. This kept us on schedule. After a great lunch at a local Mexican restaurant, we went back and recording a piece by Kevin Poelking for trumpet, piano and percussion (my CSU colleagues Tim Burns on piano and Eric Hollenbeck on percussion). This piece took a little more than four hours to record, but we got it done! My wife, Christian and I celebrated by going out to the “Mayor of Old Town” for some beers.

Here are some photos from today: 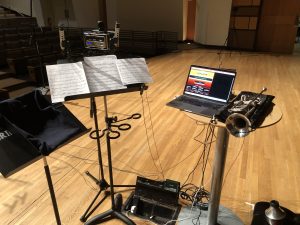 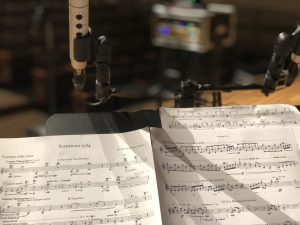 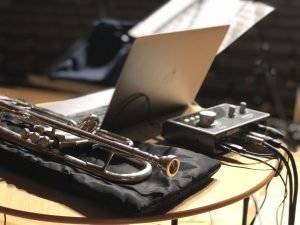 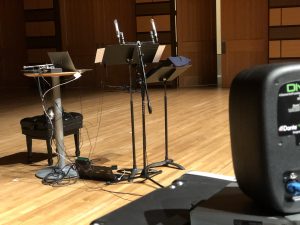 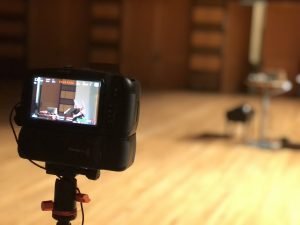 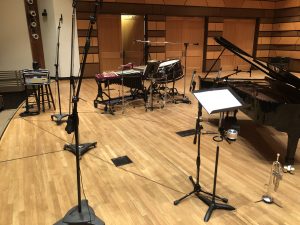 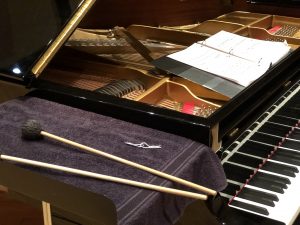 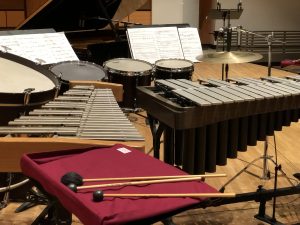 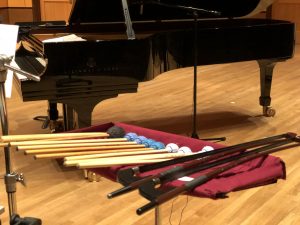 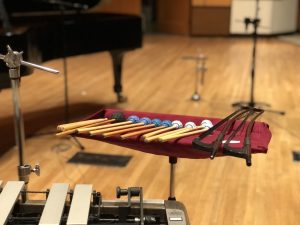