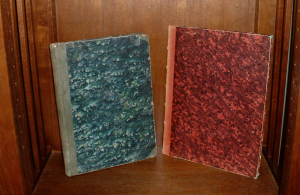 My friend, distinguished scientist and trumpeter Dr. Robert Hazen, acquired two privately-bound music books in 1988 and wrote a very nice article about these two for the International Trumpet Guild Journal (“Parisian Cornet Solos of the 1830s and 1840s: the Earliest Solo Literature for Valved Brass and Piano,” May 1995). Bob loaned them to me for examination in 2005. 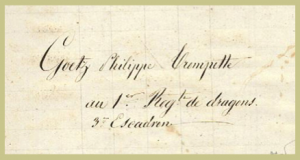 Signature of Philippe Goetz, of the First Dragoon Regiment, original owner of the two cornet books

The first book is dedicated to duets, and is signed by the owner, “Goetz Philippe, trompette, 1er Regte de dragons, 3e escadron.” This volume is filled with hundreds of handwritten duets for cornet and some duets for horn, mostly from operatic repertoire. The other book has eight solos for cornet and piano.

This photographic image shows a late 19th-century squadron of French cavalry trumpeters. This is the type of unit in which Philippe Goetz served. 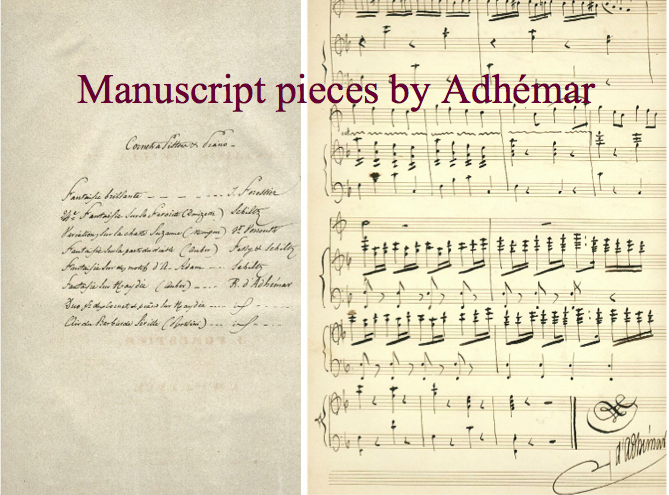 Cornet Solo Book Table of Contents (note Adhémar’s name beside the “Fantasy on Haydée”–the third to last piece–with “ditto” marks underneath).
On right, the last page of “The Barber of Seville” manuscript with Adhémar’s signature.

When I began to study the solo book, I thought that the last three pieces were anonymous manuscripts just as Bob Hazen noted in his ITG journal article. But then I noticed that the table of contents had a composer’s name for the first of these three pieces: R. d’Adhémar. In addition, I realized that the last manuscript piece is signed by the same Adhémar, although I could not decifer the signature until I associated it with the table of contents name. In this privately-bound book, three pieces by Adhémar are included: a solo fantasy on Auber’s opera, Haÿdée, a duo on Haÿdée, and an air on Rossini’s Barber of Seville (on the tune, “Ecco rodent il cielo.” Nearly all of the solos in this volume are based on operatic themes. 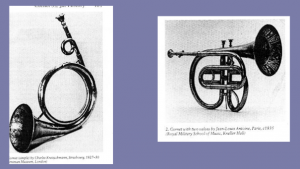 All of the pieces in this volume are written for the F-alto or G-alto cornet, pitched a fourth or a minor third lower than our modern B-flat cornet. The cornet would have had Stölzel valves. In English, we call this a “cornopean.” In French, they called it a “cornet-à-pistons.”

Adhémar was not well-known in professional music circles, but I have been able to find out that he was of the French nobility—a count—and that he had written a method book for viola. None of his music was ever published. 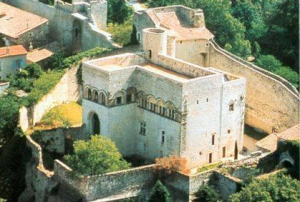