I arrived in Spain in the fall of 1994 with no understanding of the language beyond my trusty book, Quinito en España, by Lawrence Wilkins, published in 1941. I actually liked that book a lot and still have it. My wife, Melissa, eventually started taking a Spanish class for foreigners at a language school sponsored by the municipal government.

We found an apartment on the sixth floor of an older building on Avenida Finisterre. There was a little lobby with mailboxes, and the postal deliverer would ring apartments until someone let her in (so that she could gain access to the lobby and the mailboxes). But I didn’t know this yet, after living there only two weeks.

Melissa and I were relaxing in our apartment when the buzzer sounded. I heard something like “post” on the intercom, so I thought maybe the postal deliverer had a package for us. So I ran down the stairs to the lobby to get our package. The postal deliverer was putting mail into the individual boxes when I arrived. She had her back to me, kneeling down. So I walked up to her and tapped her on the shoulder. I wanted to say something like, “Did you need me?” What came out was, “Me quieres?”–literally, “do you want me?” Unfortunately, in Spanish, is the idiomatic way to ask someone if they love you. She slowly turned her head and smiled at me with a strange look and said “No…” Confused, I walked back upstairs.

We had a little television in our apartment. We had the idea that, if we watched TV, we would get a little more used to Spanish. Early on, we actually got through most of Charlton Heston’s movie, Moses, on the local television network. We had seen it many times before, so we felt like we were making some progress in learning Spanish. They always dubbed voice-overs (instead of using subtitles, like they did in the Netherlands). We stopped watching that channel after a while, but when we looked at it again about a year later, we realized it was a local channel in the Gallego dialect. It wasn’t Spanish at all, but we didn’t really even know enough Spanish to realize it at first. We had gotten through Moses in Gallego!

In our apartment we didn’t have a clothes dryer. We had to hang our clothes on a line outside of our sixth-floor apartment window. But because it rained nearly every day in Spain, you couldn’t just put your clothes out on the line, because they would get wet. You had to buy a sheet of plastic at the local hardware store and then cover your drying clothes with this plastic for them to actually dry. Of course, if it rained, then the rain water would begin to pool up in the plastic. Before you could get your clothes off the line, you had to remove the plastic sheet, and the first time I did this, I just unclipped it and shook off the the rain water.

Then I heard “Ay, caramba!!!” I had shook the water directly on top of the woman who lived on the ground floor. I was horrified, and my mind raced for the appropriate thing to say in Spanish. I wanted to say I didn’t understand the customs here. I thought I knew the word for “foreigner.” But instead of using the correct word “extranjero” I said, “Lo siento, soy estraño!!” which literally means, “I’m sorry, I’m strange!!” 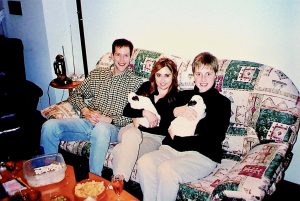 Me, Silvia, and Melissa. Silvia had rabbits.

Eventually I started taking private Spanish lessons from Silvia, the wife of the orchestra English horn player. I eventually got much better. But even after two years there, I would still get strange looks from some of the people. Once, one woman standing beside me said, “que acento bárbaro!” (what a barbaric accent!)