In yesterday’s post, I shared a recording of a solo I did in 2013 on a Navy Band tour of the West Coast. I want to share some other memories of that tour in the next few days’ posts.

Among the highlights: a photo of me with RADM (ret) George W. Lotzenhiser, who came back stage after I soloed on Vincent Bach’s Hungarian Melodies. He was an MU, but transferred to another rate and went all the way to O-8. Here’s an article on him. He showed me a trumpet pamphlet (he’s holding it in the photo) that had been signed by Vincent Bach in 1934! Trumpeter David Doerksen of the Portland area came to a concert. David had been the teacher of Navy Band trumpeter, John Schroeder. We also enjoyed visiting with Dr. Joan Paddock, trumpet professor at Linfield University.

I had a chance to visit my cousin Tanya and her family–and her father (my uncle Bill). 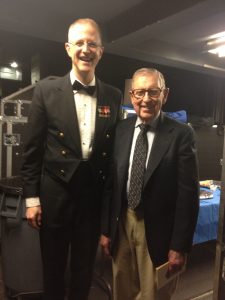 RADM (ret) George W. Lotzenhiser with me after a concert 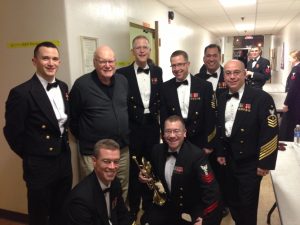 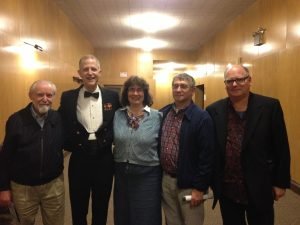 Joan Paddock and others visiting backstage after concert 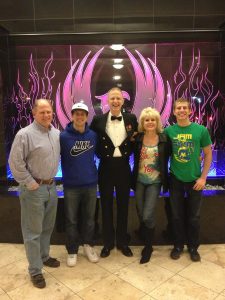 My cousin Tanya and her family 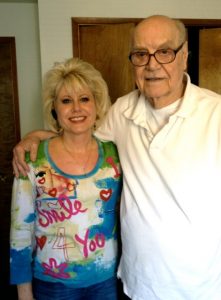 Cousin Tanya and my uncle Bill in Oregon

We stayed at the Grand Hotel, in Salem, Oregon, where I started a little tradition of photographing a Hot Wheels Ferrari–to send back to my two boys. They both really liked cars back then. We also had a visit from retired Navy Band member, Scott Alexander and his daughter. 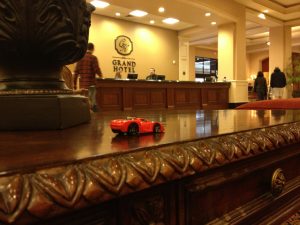 my Ferrari in the Salem, Oregon, Grand Hotel lobby 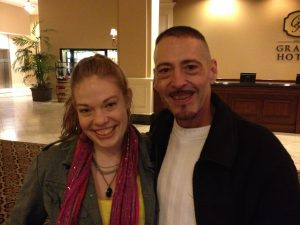