In 2014, the U.S. Navy Band Brass Quartet was invited to the Midwest Clinic in Chicago to make a presentation about transcribing. We all talked about various aspects of the art of transcribing, and we played examples of transcriptions to illustrate our talking points. I prepared a slide show for that presentation–about how to prepare a transcription for a small ensemble, that I would like to share (much of this presentation was later altered to look more like an official Navy presentation, so this was not actually the final version of what the audience saw). 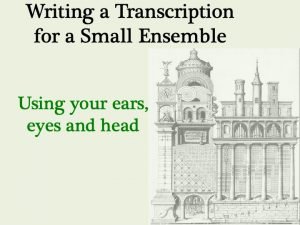 We listen to a recording not only to get the details but also a general impression. 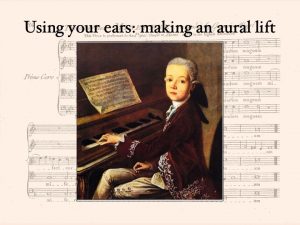 When he was 14 years old, Mozart visited the Vatican and heard the Sistine Chapel Choir sing Gregorio Allegri’s Miserere. This setting of Psalm 51, composed in 1638, had never been copied, because the Pope had prohibited it in order to preserve the work’s mystery and genius. But the Pope hadn’t planned on young Mozart, who, after one hearing, went back to his lodging and transcribed the whole piece on paper by ear and memory. After a second hearing in a few days to correct a few errors, the resulting piece was handed off to the famous music historian Dr. Charles Burney, who had it published. We can all make transcriptions from listening to music—but we normal humans may have to start with some baby steps. You must have perceptive enough ears to make an aural lift. Work on your ear-training: Interval recognition, Unlocking chords, Melodic dictation, Harmonic dictation. Use software to slow or tune the recording, if needed. 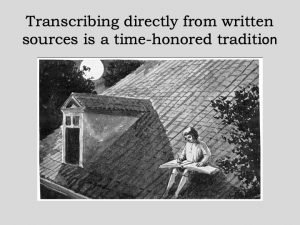 When Johann Sebastian Bach was a boy of about 10, he lived with his brother, Christoph. His brother had a composition notebook full of works by great composers, but he had denied Johann access to this book, and so it stayed shut in a locked cabinet behind grillwork doors.  Johann’s hands, however, were still small enough to pull it out through the spaces in between the grillwork.  At night, then, when everyone was asleep, Johann would remove the notebook, and he would copy the book by moonlight.  It took six months to transfer all the contents, but by the end, Johann had carefully copied every note, learning the melodies, harmonies, and compositional forms of Pachelbel and Froberger, among others. 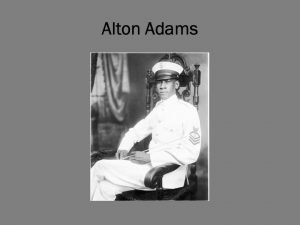 Alton Adams, the first African-American bandmaster in the U.S. Navy, and leader of the U.S. Navy Band in the Virgin Islands after the U.S. purchased the islands from the Danish government in 1917, had to learn composition the hard way—by himself! When he was young, he and his friend would hang around outside the house of a neighbor who had a phonograph player. They would listen in rapture to the John Phillip Sousa marches that this man would play on his machine. Later in his life he copied out Sousa band parts into his own working score so that he could study the harmony, orchestration and form of the most popular march composer of his day. One relatively famous march of his was written in 1921 to honor Rear Admiral Joseph Oman, the appointed Naval governor of the new territory. 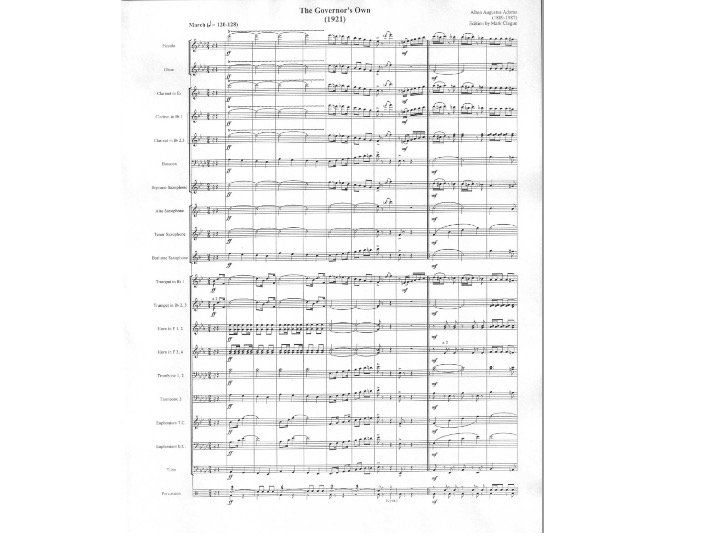 As any Naval ceremony might begin with a bugle call to attention, so begins Adam’s march that he called The Governor’s Own. As you can see from this full score, it is written for a fairly large band, much in the style of Sousa. In 2011, I decided to transcribe this march for the Navy Band Brass Quartet. I listened to this recording by the Goldman Band to get a general idea of the piece. I did not have a score like this one (the Navy Band library only had a file of individual parts). So, I borrowed the following parts from the folder: first cornet, second/ third cornet, baritone, first/second trombone, and tuba. I borrowed these parts because I believe that the most essential parts to a traditional composition are the following in this order of importance: 1.The melody, 2. The bass-line, 3. The counter-melody, 4. Strong figuration, 5. Any remaining harmony 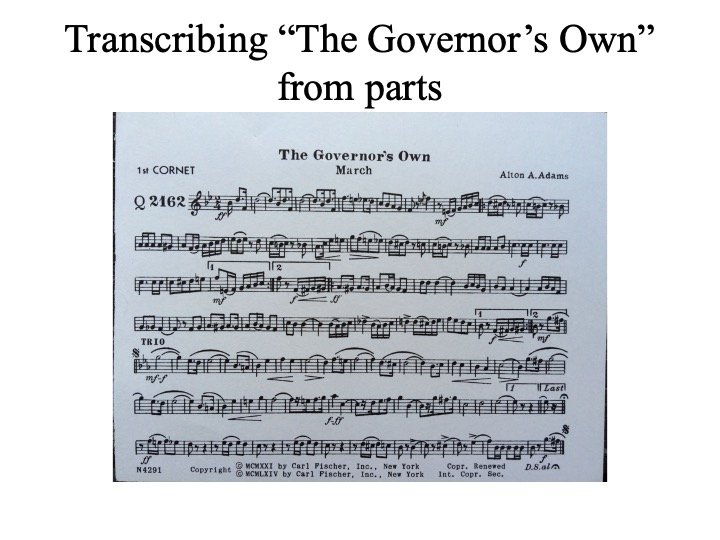 The most important part of the transcription is the melody, which, in this case, is in the first cornet part. 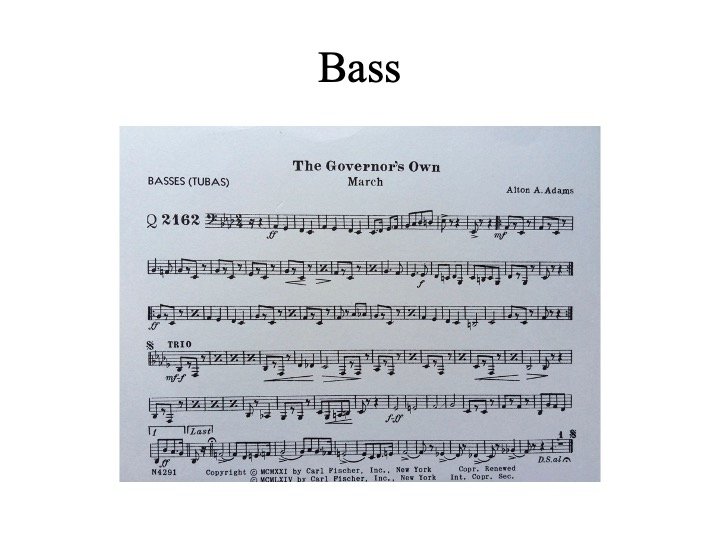 The bass-line is the next most important part of a march transcription. In my transcription, I never deviated from this part when I wrote the tuba part for the quartet. It was already complete and essential. 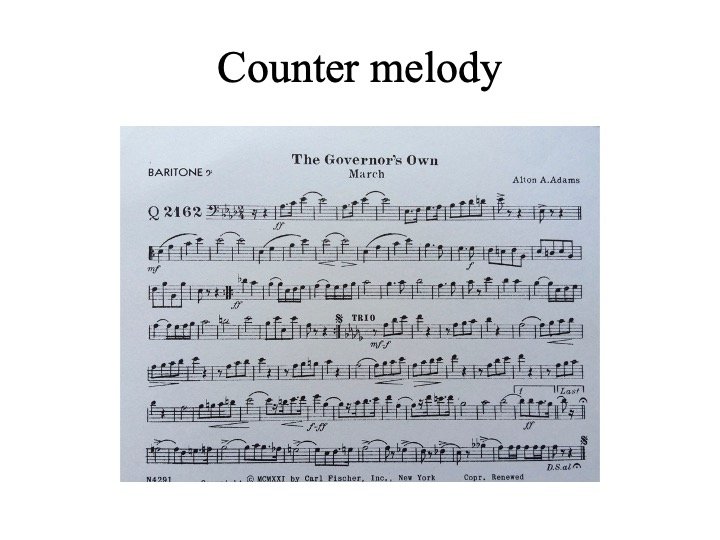 The baritone has traditionally been the instrument of countermelodies, so I didn’t need to deviate much from Adams’ original baritone part when I wrote the Euphonium part for the quartet. 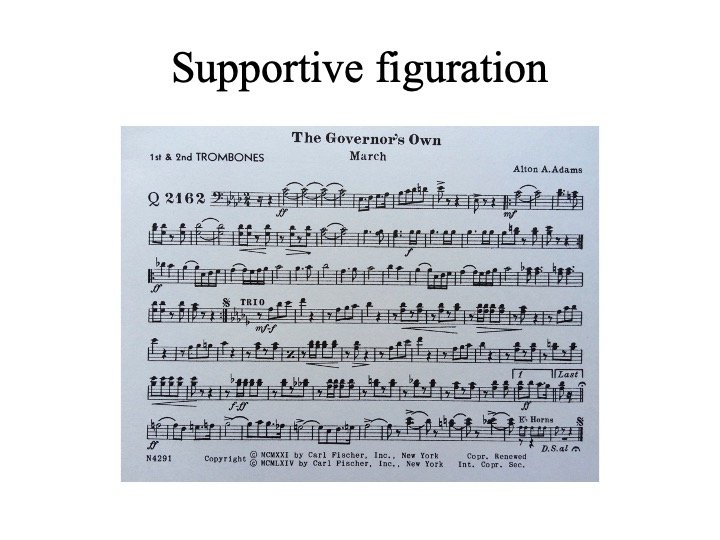 Since I had to make some decisions about what was most important to the ear in this march, I decided to not use much of the figurative, syncopated material in the trombone parts. I only used the trombone parts for a few passages to cover the essential harmony—and thoseparts did not even include rhythmic figuration. If I were working with a quintet, however, I would definitely use the off-beat rhythms that Adams’ trombone part often shows here. 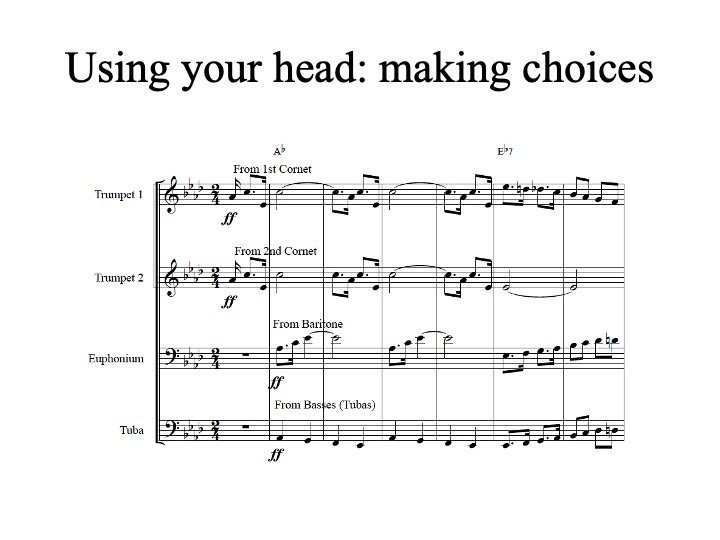 Here is the beginning of my working score. As shown here, it is in concert pitch, and I have notated the basic harmonic progression to keep track of the harmony. Notice that I have begun with the most logical choices for the 4 instruments in the Navy Band brass quartet, because they supply the melody, the bass-line, the countermelodies and essential harmony. 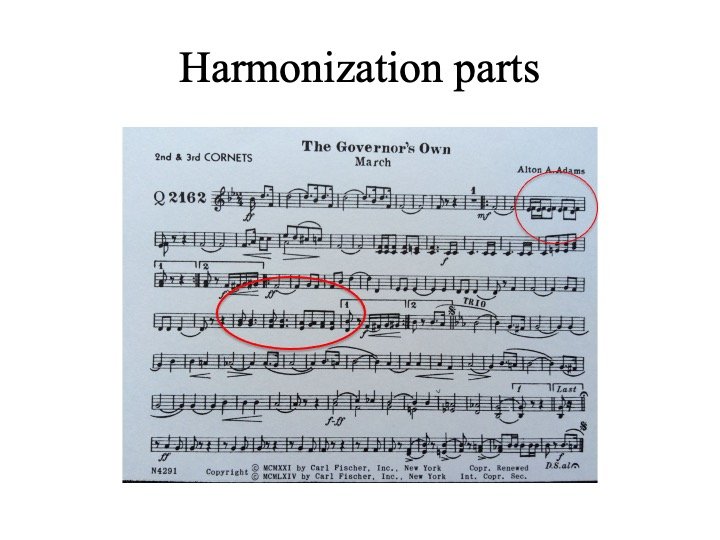 The second/third cornet part—a divisi part—supports the melody in The Governor’s Own by harmonizing it. With the divisi on this part, I was given the opportunity to choose the best fit for any missing harmony while providing good melodic contours to all the parts. 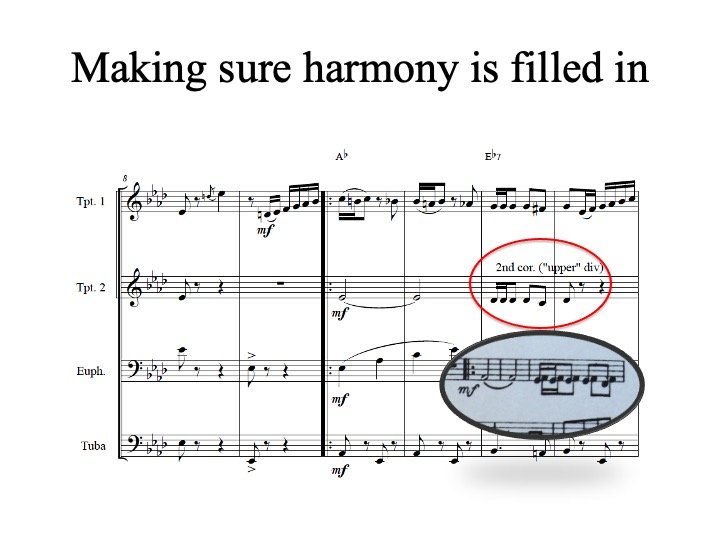 For example, I chose the lower notes in measure 10, so that the seventh of the E-flat dominant chord would be heard. 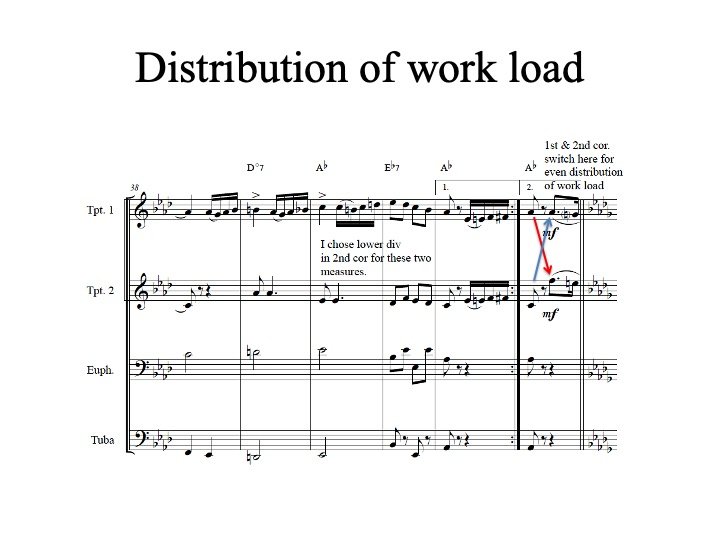 Playing trumpet in a brass quartet can be extremely difficult for endurance. For this reason, we try to keep our repertoire well-balanced in terms of the demands placed on the trumpets. After playing through the first trumpet part of this march, I realized that it was too much playing in the high register. So I decided to give the first player a little relief by switching the parts for the trio. Here, in the second ending, the second trumpet goes up to the melody while the first trumpet drops down to harmonize. 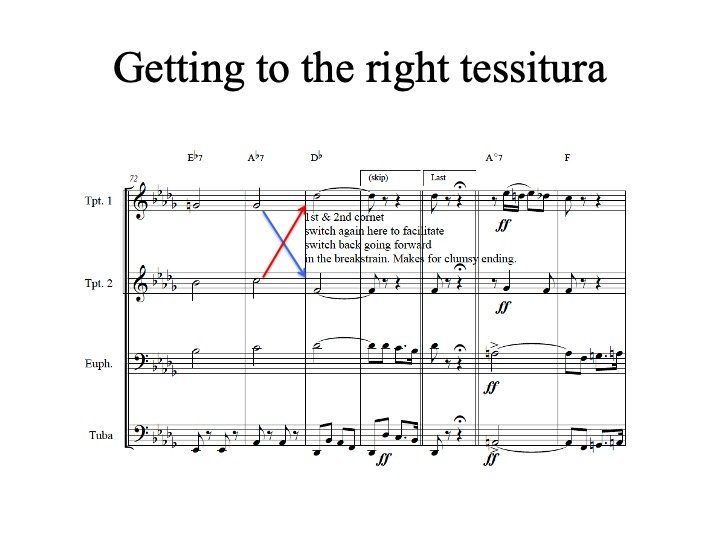 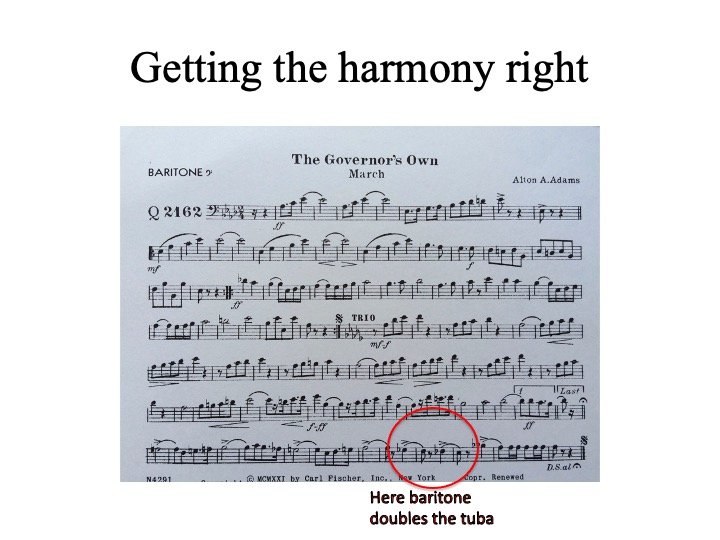 The baritone, five bars before the end, doubles the tuba part at the octave—this strengthens the bass line, but weakens the harmony if you only have four instruments to perform. 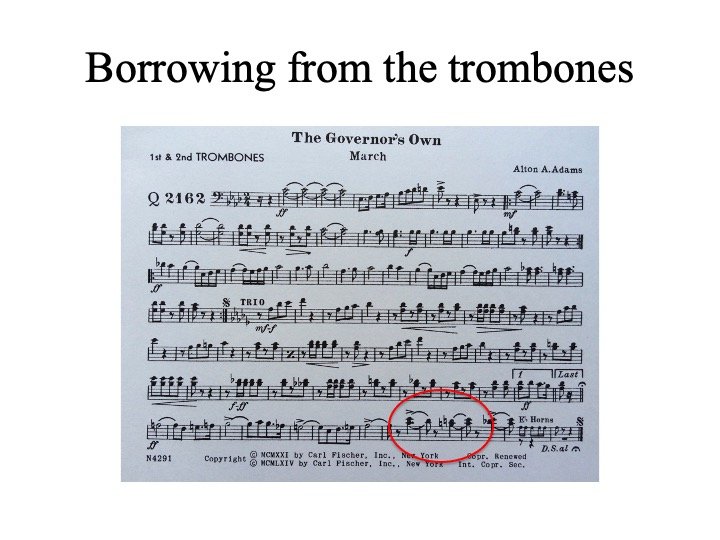 Fortunately, the trombone parts have some alternate pitches in the same place. 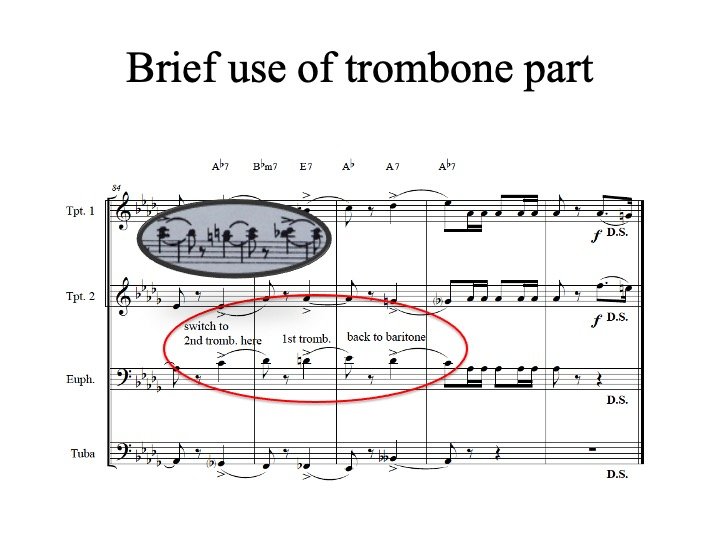 So I ultimately decided to change these notes in the Euphonium part to complete the harmony. You can see here where I borrowed from the trombones instead of baritone. 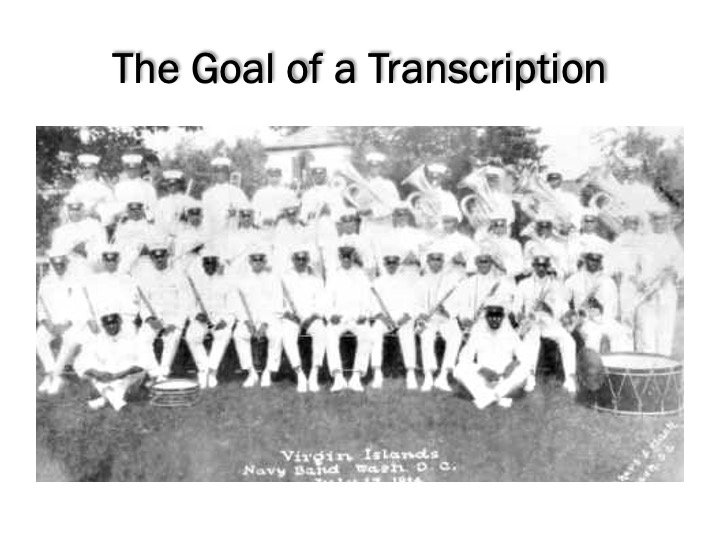 After I had done my best efforts in the visual and mental categories, I went back to the full-band recording of Alton Adams’ “The Governor’s Own.” I listened once more to make sure that my transcription got the essence of what I heard in the recording. Then I printed and gave out the parts to the Brass Quartet. It has become an important addition to many programs including a 2012 special presentation that focused on the Heritage of African-American Diversity in the U.S. Navy Band Program. Here is great photo of the United States Navy Band of the Virgin Islands, taken at Howard University in Washington, D.C., July 17, 1924—just three years after “The Governor’s Own” was composed. Of the thirty-eight musicians pictured, Adams is in the first row center, holding a baton and piccolo.

In conclusion, for a transcription to be successful, I think it has to have the benefit of perceptive hearing, taking the time to look at any available visual sources, and making good decisions when there is a question. When it turns out to be a successful transcription of a historic piece, then it is as if we have created a special link to the past. We also grow in our own musical knowledge as we virtually are looking over the shoulder of the original composer.

Here’s a later video of the Navy Band Brass Quartet playing Adam’s The Governor’s Own: