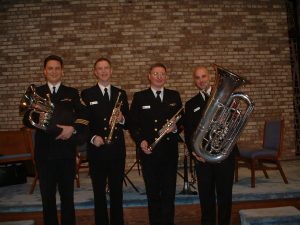 In 2002, I reenlisted in the Navy. Around the same time, I did an arrangement of a Gabrieli Canzona for the Navy Band Brass Quartet that we did on a Navy Band Chamber Music CD. That arrangement included all of the kinds of ornaments and musical phrasing ideas that I had been learning as a cornetto player–and put into notation for modern brass players.

I think this arrangement was successful, but I don’t think it was “historically informed performance practice.” It was a hybrid of HIP ideas mixed with a modern brass approach–and it worked, I think. We had a lot of discussions in rehearsal about how to articulate and phrase, so in that sense, I think we learned a little more about Gabrieli and our own possibilities.

Here is that recording with John Schroeder and me on trumpets, Joe Dollard on euphonium and Andrew Oppenheim on tuba.