While remembering when events happened in this blog “memoir” series, I have made many errors–usually corrected right after posting. If you see anything that isn’t right, please let me know, and I’ll be glad to correct.

Today, I’m picking up where I left off in my Navy Band career. In the year 2000, I was sounding about 50-80 “Taps” per year, including at Arlington’s Tomb of the Unknowns.

I ran the 2000 Marine Corps Marathon. My running buddies were from the Navy Band: Tim Dickson (trumpet) and Andy Carlson (tuba). Around the 20th mile, someone accidentally tripped me from behind. This badly strained by left hamstring, and I would have quit at that point if it weren’t for Tim and Andy’s encouragement. The cheering of the crowd at the end was emotionally amazing. What was also amazing was that Melissa watched me run at about five different checkpoints, while strolling around with Felix, our new-born son. 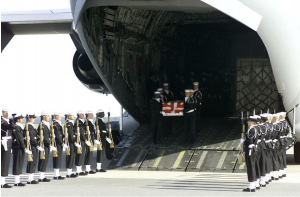 Members of the US Navy Ceremonial Guard carry the remains of a fallen Cole sailor off a C-17 at Dover AFB, 14 October 2000.

That evening, I was part of a ceremonial unit that met a Navy plane at Dover Air Force Base. We were providing musical honors for the 17 casualties in the USS Cole bombing. We had to stand at attention for a couple of hours at that event–unfortunately, this further strained my hamstring. I was not able to go running again for another six months, and I have not run another marathon since then.

I was already supervising our van pool (gassing and cleaning them up), and I was now a member of the Brass Quartet. Some new collateral duties I volunteered for was the arranging staff and uniform locker manager.

The huge benefit to me in the arranging position was that we learned from staff arranger, Bryan Kidd, how to work with Finale, the music writing software. I became a convert to keyboard shortcuts.

I also enjoyed helping people with their special uniforms that the band gave them (including our performing uniform, which was basically the “mess dress” uniform–similar to a tuxedo). After doing that job for a year or two, I could correctly guess people’s jacket sizes just by looking at them. I supervised two people, and I managed a budget of close to $20,000 per year.

I began arranging pieces for the brass quartet with my new Finale skills. I also made an arrangement of the Shostakovich Festive Overture for a Navy Band trumpet ensemble of 6 people–Jim Ruffaner, Jerry Keener, Paul Johnson, Kevin Dines (piccolo trumpet), Bob Couto and myself. We were invited to play this and a few other fanfares at the 2001 ITG Conference hosted at the University of Evansville (where I had taught from 1991-93). Here is an audio clip of the Festive Overture, live from the conference: 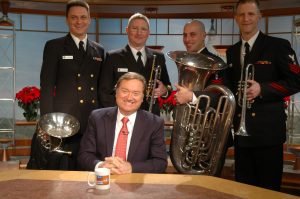 I also arranged “America” for another appearance of the Navy Band Brass Quartet Tim Russert’s “Meet the Press” (John Schroeder and I on trumpet, Joe Dollard on euphonium, and Andrew Oppenheim on tuba). Here is a live audio clip from the show of “America.”

Of course, it’s important to remember that during this time, the attack on the twin towers in NYC and the Pentagon in the DC area happened (September 11, 2001). I remember being at home with our first born, just a baby, and my mother-in-law, Lori. It was so surreal to watch what was happening on the television. Melissa had been at a rehearsal on the Navy Yard, so she was required to stay on base for several hours. When she finally drove home, she saw the fire still burning at the Pentagon. Lori had to go back home by train because all air traffic had been suspended. If she had waited a little longer, the trains would be shut down as well.