I had taken a couple of compositions courses in my earlier student days, but I had not really written anything since those courses in the 1980s. In 2003, I decided to seriously try out composing. Not small. I went big. With a fully-orchestrated concerto for brass quartet and band. Because I thought it would be interesting to learn. My plan was to adapt all of my favorite ideas that I had heard from other composers into my own piece. It took a really long time for me because I was essential composing the piece in full score with a tiny screen (I believe I was working on a Gateway computer with Finale). 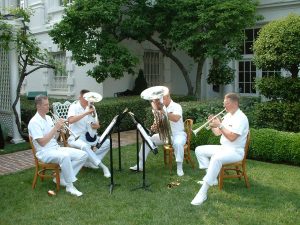 The result was a potpourri of interesting ideas without as much continuity as I would like–but, who cares? It was a composition that got performed by the Navy Band Brass Quartet with the Navy Band. The soloists were John Schroeder and I on trumpet, Joe Dollard on euphonium and Andrew Oppenheim on tuba. Unfortunately, I have not been able to find the audio from that concert. But I do have a midi-file recording extracted from Finale, which is at the end of this post if you would like to hear it.

Here are the program notes which were read at the concert:

The Concerto for Brass Quartet and Band is dedicated to the U.S. Navy Band Brass Quartet. At the beginning of nearly every rehearsal, the Brass Quartet warms up with a hymn by J. S. Bach. This made a great impression on MU1 Curtis, so he started with the chorale tune “Christ lag in Todesbanded” as an inspiration for his Concerto. Nearly every melody in this composition is based on either this chorale tune or the medieval chant on which this chorale tune is based. Limiting himself to these melodies, MU1 Curtis tried to capture various sounds of the past, such as the Renaissance style of Adrian Willaert, the hymn style of Bach, the early Twentieth-Century styles of Gustav Holst, Dmitri Shostakovich and Igor Stravinsky, and the jazz styles of the 1950’s. The piece contrasts the clear emphatic sounds of the four brass soloists with various colors of the other wind and percussion instruments in the band. This piece is the first large-scale composition of MU1 Curtis, and tonight’s performance marks its world premier.

The intro, played by the quartet soloists, was inspired by the opening of Shostakovich’s Fifth Symphony:

Then, because I love Holst, I borrowed from this idea of cascading fourths from “Jupiter” from Holst’s Planets.

And some Stravinsky Rite of Spring borrowings:

And then back to the Planets with a little adaptation from “Venus.”

And then this from a Bach chorale setting:

And then some cadenzas the feature pairs of the soloists: