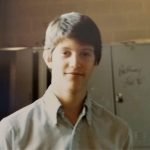 A few days ago, an old friend shared some photos with me from when I was 16–in 10th grade. I actually kept a diary back then, so I looked through it a little to see what musical things I was doing in 1980. 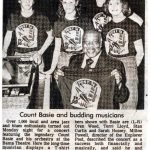 I played in a jazz band sponsored by the Boy Scouts (and led by Milton Powell). It was “Explorer Post 34.” It was perhaps a year later that we sponsored a concert by Count Basie in Tuscaloosa. What a memory that was. 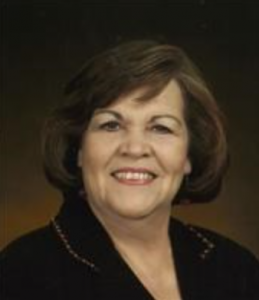 I took piano lessons with Syble Coats. She was a great teacher and hers was a pretty competitive studio. Sometimes I played piano for Sunday School at my church.

I took trumpet lessons, of course. They were from Michael Johnson, trumpet professor at the University of Alabama. My mom would drop me off at his office on campus. Sometimes I would meet his college students (like John Drissel, who I very much admired–he later went on to graduate school at the Cleveland Institute of Music and then won an orchestral job in Florida). 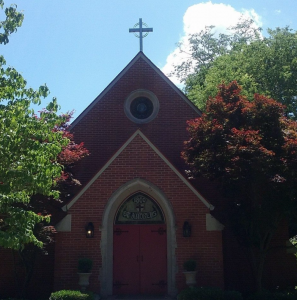 On January 31, I bought my first copy of the Haydn Trumpet Concerto. On April 26, I performed it in a Solo and Ensemble Contest (first movement). I earned a high score (a “one”).  My accompanist was Vernon Williams, the music director of Canterbury Episcopal Church (and he offered to have me play during services at his church after we collaborated on the contest). During the same contest, I played a duet with Jeff Arrendell and a trumpet quartet “Rondo and Humoresque” (with my best friend Bruce Milligan, Jeff and Jerry Cargile). We only got a “2” for the duet and quartet. But I think they were performed on about two rehearsals.

In May, my mom ordered a Bach Stradivarius B-flat trumpet (43 bell) from Giardinelli’s in New York City. She sent a check, and it came in the mail. Later that month we had our spring band concert, where I played Leroy Anderson’s Bugler’s Holiday (with Jeff Arrendell and TaDarol Lewis).

In June, I started rehearsing marching band for the upcoming semester. In my high school band, we had about 215 members. It was a newly-desegregated school, and there were a lot more blacks than whites in the band. I found this to be really great, and I learned music making from a little different perspective. There was a lot more improvising and having fun with the music than I had been used to. I wrote in my diary, “it seems that where it takes me three months to learn something, the other good trumpet players only take a week.” I remember Jon Willis, who could single tongue sixteenth notes at about mm. 160. I never could do that. I don’t have them now, but it looks like I wrote two trumpet fanfares.

I was exercising a lot back then. I rode my bicycle everywhere around Tuscaloosa. Mostly with my friend Bruce. We even rode 10 miles out and back on the interstate (not very safe). I timed myself at 55 seconds around a 440 yard track.

In July, I played in an on-stage marching band in the musical Showboat. Later that month, I estimated that, between trumpet and piano, I played about eight hours a day. My trumpet-playing friend, Reginald Blackmon, loaned me a Doc Severinsen album.

In August, I played some Brandt Etudes for my trumpet lessons (numbers 28 and 33). My high school marching band played for the grand opening of the University Mall. And my band teacher took me to the DCI world championship in Birmingham (the Blue Devils won)