Long before I joined the U.S. Navy Band, members weren’t allowed to take outside gigs. I’m not sure of the reasons, but I have heard that it was to prevent military members from competing with union musicians in the civilian community for the same gigs. Nevertheless, by the time I joined the band, there was no problem with taking outside gigs–as long as the Navy Band always came first. If a conflict arose, then you had to let the gig go and do the Navy ceremony. 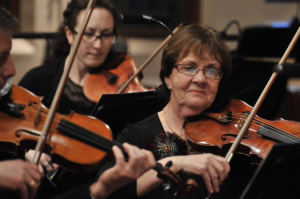 Pam Lassell, violinist and important contractor in the Washington area

n 1998, I was reading in the Washington Post about an upcoming performance by Washington Bach Consort (WBC)–and the advertisement said that they were playing on period instruments. I made a few calls, and I found out the contractor, Pam Lassell, lived only a few blocks from me. I called her up, and she invited me to come over and visit on her porch. We chatted about my baroque trumpet experience, where I had been and where I had studied. After that, she began to contract me for the WBC and the Cathedral Choral Society orchestra for the next many years. I enjoyed working with the other trumpeters–I often worked with John Thiessen, Fred Holmgren, Bob Birch or Bob Hazen in those first years. I also really enjoyed enjoyed working with Reilly Lewis, who was such a great musician. 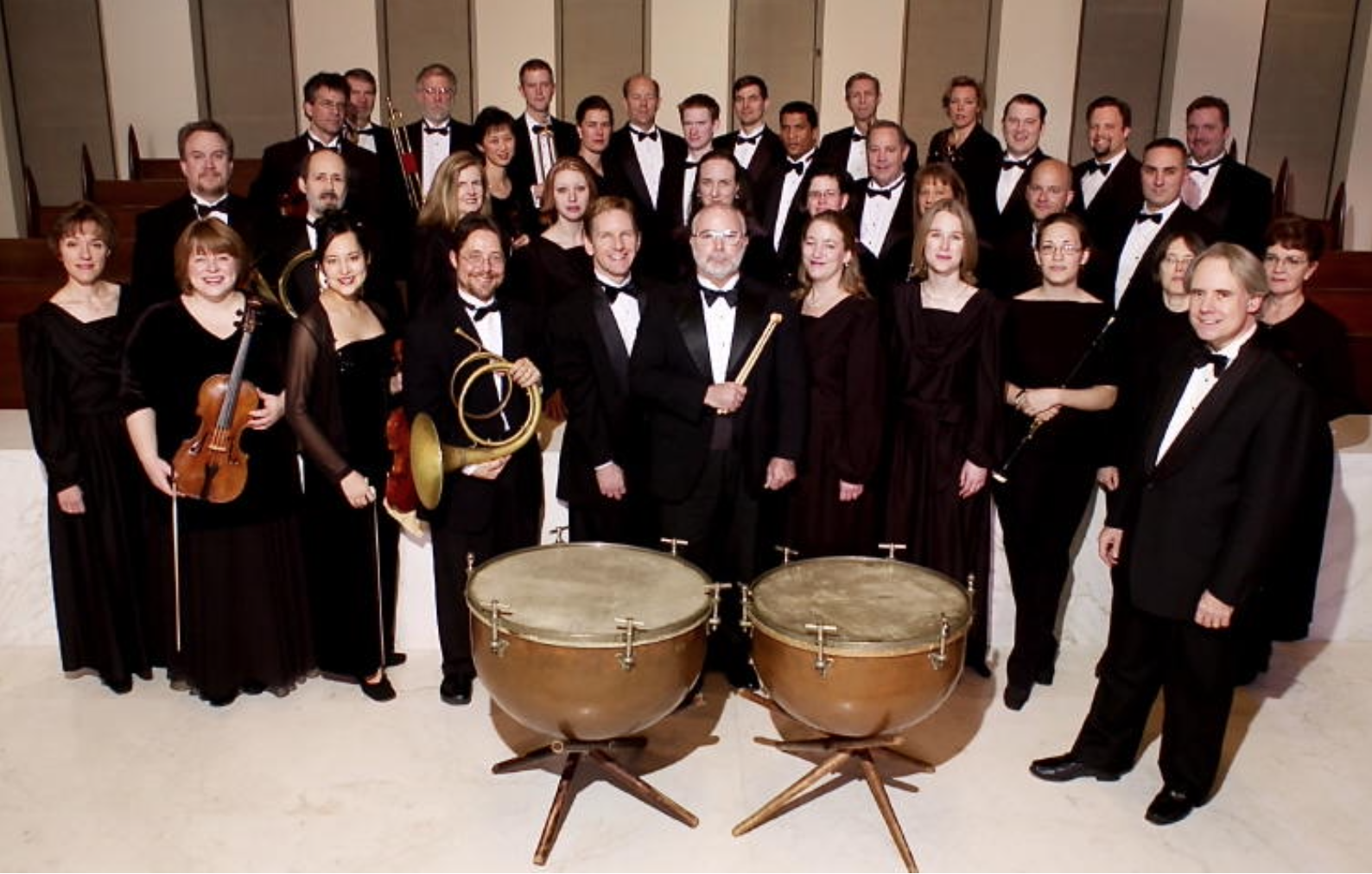 The Washington Bach Consort around 2000. Trumpets in the back are Bob Hazen, Fred Holmgren and me.

I remember once, a few years later, Reilly asked me to play at Senator Jay Rockefeller’s house, which was situated on a hill in the center of D.C., near the National Cathedral and the Zoo. But if you were to look around on his property, it would seem like it was in a remote forest–not in a major capitol city. Sen. Rockefeller was hosting a fundraising soiree for the WBC. Sen. Rockefeller, one of the biggest supporters of the WBC, was basically leaning on all of these lobbyists to support Reilly’s group if they wanted to get any business done! When I walked in, Reilly asked if I would do Bach’s Cantata 51 with a singer, which was fine with me. He said he would accompany me on the piano, but was happy to accommodate me at baroque pitch (down a half step). I said yes, so he proceeded to basically sight read the keyboard reduction to Cantata 51 (which is pretty hard as is) in 7 flats! He was a magician. 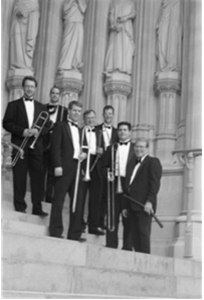 The Washington Cornett and Sackbutt Ensemble in 2002

Another great opportunity happened when my wife and I were on our way to the home of a Navy Band colleague, Mike Curtis, a bassoon player in the band. He had invited us over for a little party. But while we were riding in the car there, the public radio announcer said that there was going to be a concert that evening of the Washington Cornett and Sackbut Ensemble (WCSE). I couldn’t let this opportunity go by. I begged my wife to let me leave the party for a while to go and meet the people in this group. Mercifully, she agreed, and I went to hear the end of WCSE’s concert. I came up to them–Michael Holmes, Michael O’Connor, Bill Page, Greg Garrett, Graydon Barnum and Brian Cardell–and said I played cornetto. I played one of theirs to show them, and I talked about what I had been doing. That was when they invited me to come to their next rehearsal, starting a long relationship I have had with this group. Greg Garrett was a singer in the U.S. Army Chorus, but he was quite good at Renaissance and Baroque music–and he could play the cornetto well. Bill Page was a scientist, but he also loved early music and the cornetto. I remember playing a lot of Orlando di Lasso duets with both of them. The members of this group have changed over the years, but they are dear friends, and I cherish every rehearsal, concert, recording (and pub visit after concerts) that I have had with them.