Today, I spend a nice amount of time chatting about how the Historic Brass Society’s virtual conference went with members of the HBS Board and with the organizer of the event (Sandy Coffin). We did our entire conference on the Zoom platform. It was a little informal, but comfortable for attendees. Question-and-Answer sessions also felt comfortable and cozy. On the whole we all liked it and will definitely consider doing a virtual conference again in the future. 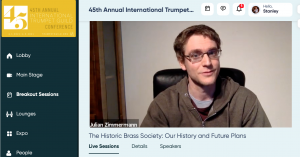 Then, after a 30-minute break, I got on to the HBS’s video presentation for the International Trumpet Guild to answer any questions from the attendees. The ITG is also doing a virtual presentation. Their platform is Accelevents. This is a pretty robust platform, but I felt like it was more disconnected among the participants, because in large part there is no video communication between attendees. The HBS/ITG presentation went well, even though the number of attendees was not as high as we were hoping for.

The great thing about a video presentation, however, is that it still exists!! So, we in the HBS will be uploading it to our YouTube channel to continue sharing it.

I love the opportunities of summer-time conferences. There is so much wealth of information and music to share.

Now, I need to find a practice room….

Earlier this week, the Historic Brass Conference presented a virtual conference that was organized by Sandy Coffin, an American trumpeter and copyeditor, getting her doctorate in Scotland. The theme was “Pond Life: Crosscurrents over the Atlantic.” Over three days there were 21 presentations, a keynote address, a memorial session, an award ceremony, and a live performance.

Sandy Coffin hosted the Zoom conference on her computer while streaming the pre-recorded presentation videos. Although I am now the Vice President/President-elect of the HBS, my job was pretty easy. I watched all the presentations on Zoom and followed the chats. I was a “moderator,” along with two others–Joanna Hersey, the HBS Secretary, and professor of tuba at University of North Carolina at Pembroke, and John Wallace, professor emeritus at the Royal Conservatoire of Scotland and a great trumpet/cornet player.

Most presentations lasted about 20 minutes with about 10 minutes of live discussion with the presenter. I would be “spotlighted” with the person who just presented, and I would ask questions that came up in the chat from the viewers. If there were no questions, then I would pose a question of my own. This was a little daunting, because I almost always needed to fill in some time with a question of my own, but I enjoyed the the “hands on” experience of watching the presentations and coming up with good questions.

For this conference, thanks go to: Sandy Coffin, John Wallace, Clair Tomalin (video editing), Sarah Deters at St Cecilia’s Hall for donating the space an ad coordinating everything on site, and the New York State Council on the Arts (funding support), Bryan Proksch for website posting, HBS President Jeff Nussbaum and Bradley Strauchen.

Here are some of my favorite highlights from the conference: